B Strong did not significantly impact BP response during yoga.

Blood flow restriction (BFR) training has been incorporated into a more common activity of daily exercise (e.g., yoga) in recent years. A combination of yoga and BFR, each of which elicits marked pressor responses by augmenting vascular resistance and/or skeletal muscle chemoreflex, may further increase blood pressure and myocardial oxygen demand. Purpose: To determine the impact of a combination of yoga and BFR on hemodynamic responses. Methods: Twenty young healthy participants performed 20 yoga poses with and without BFR bands placed on both legs. Results: At baseline, there were no significant differences in any of the variables between the BFR and non-BFR conditions. Systolic and diastolic blood pressure and heart rate increased in response to the various yoga poses (p<0.01) but were not different between the BFR and non-BFR conditions. In general, hemodynamic responses were more pronounced during more difficult yoga. Rate-pressure products, an index of myocardial oxygen demand, increased significantly during yoga exercises with no significant differences between the two conditions. Rating of perceived exertion (RPE) was not different between the conditions. Blood lactate concentration was significantly greater after performing yoga with BFR bands (p=0.007). Cardio-ankle vascular index, an index of arterial stiffness, decreased similarly after yoga exercise in both conditions while flow-mediated dilation remained unchanged. Conclusion: The use of blood flow restriction bands in combination with yoga did not result in additive or synergistic hemodynamic and pressor responses. 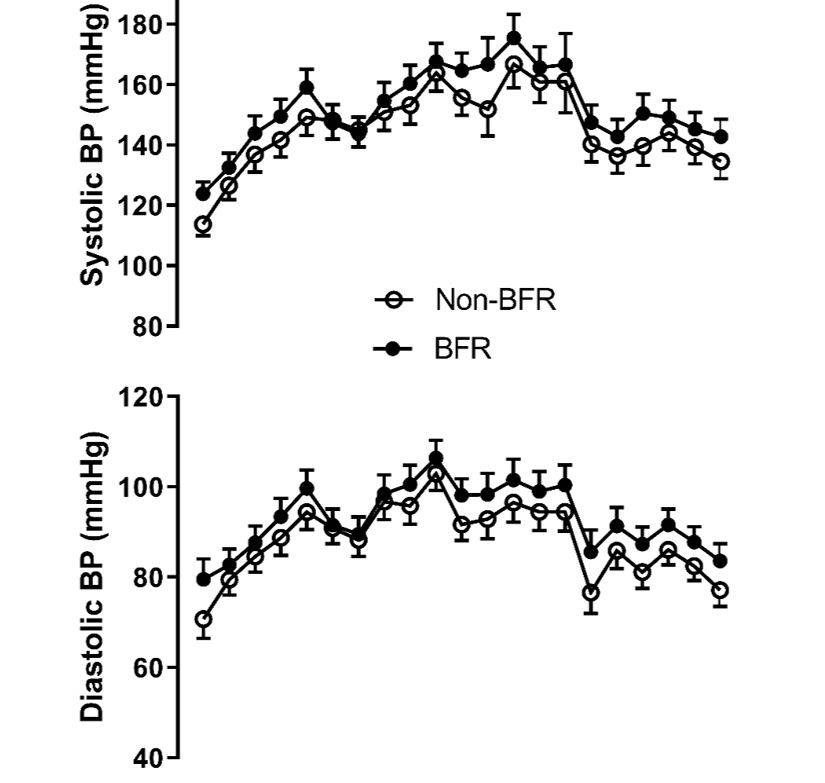